How to play C Major scales on the piano 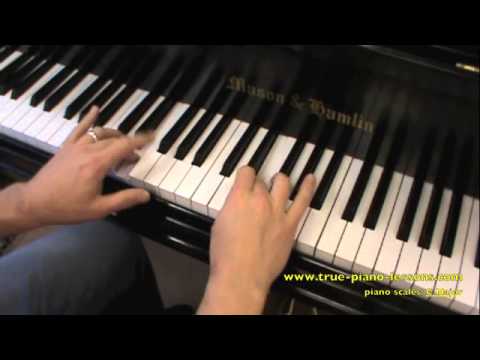 If you look at the layout of the right and left hand, you will notice that the positions are a mirror image of one another.

The following charts will help you visualize the patterns of the C major scale.

The C Major scale on the staff

How to play the C Major scale with the hands together

Playing with your hands together presents different challenges than playing with hands separately. When playing the scale together, it’s important to focus on moments when the hands connect and unify rather than the positions each hand. The following charts show how particular focal points to hone in on with the C Major scale:

The first landmark to notice is where the 3rd fingers fall together. In the case of the C Major scale, this is on the notes E and A. So, every time you play an E or A, both hands will be playing 3rd finger.

The next landmark is the hand position with fingers 2 and 1 that falls in between the 3rd finger landmark above. On the notes F and G, fingers one and two play in a mirror image that you can hold and visualize as a position. I sometimes call this the “lobster claw” position because your 1st and 2nd fingers form a kind of pincer shape.

Going from one to two octaves is the hardest step, but once you get comfortable with this, it will be much easier to expand into three and four octaves. It is important to keep the hand positions in mind so that you keep the scale compartmentalized in your mind rather than getting lost in the long string of notes.

Here is the C Major scale displayed in 2 octaves on the staff:

For a complete and detailed overview of how to practice scales, please read this article.

Other techniques related to the C Major Piano Scale: 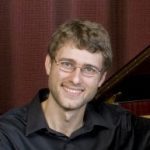 Loren Fishman (D.M.A) is an award-winning concert pianist who has been teaching in both private University settings for over 20 years. Ninja Piano is an effort to make professional piano instruction and resources accessible to everyone.